Are you frustrated by stubborn pockets of fat on your body despite diet and exercise? You are not alone.  Millions of people have turned to Coolsculpting to permanently lose fat in those common target areas. CoolSculpting fat freezing treatment in Washington, D.C. at Braun Dermatology & Skin Cancer Center is the advanced, noninvasive treatment that so many people are using to take control of their figures.

The safety and effectiveness of FDA-cleared CoolSculpting depend on the process of selective cryolipolysis. To better understand how CoolSculpting works is to break down the word: a mix of “cryo” for freezing, “lipo,” for fat, and “lysis,” which refers to “destruction.” So, cryolipolysis is the process of applying cold temperatures in a controlled manner to fatty areas to destroy them. The targeted  fat cells are eliminated from the body gradually via natural metabolic processes. Once those fat cells are eliminated, they are gone for good. With other methods of fat reduction, such as diet and exercise, the cells shrink in size; they aren’t eliminated via the lymphatic system. The number of fat cells remains the same. If you gain weight again after you stop exercising or eating well, those existing fat cells just get bigger again.  With Coolsculpting, the treated problem areas will not gain as much volume when weight is gained. This is why it can truly be called body “sculpting”.

Researchers at the Wellman Center for Photomedicine, a Harvard University affiliate, made the revolutionary discovery that ultimately led to CoolSculpting. Drs Dieter Manstein and R. Rox Anderson observed that, after some kids ate popsicles, they developed dimpled cheeks. The ice had targeted fat cells, without causing damage to surrounding skin and other tissues. This observation led to more work on how to use cool temperatures in a way that selectively damaged and later destroyed subcutaneous fatty tissue without damaging and destroying the skin. From there, the company Zeltiq was formed in 2005, and since that time, more than five million treatment cycles have been completed across the globe. 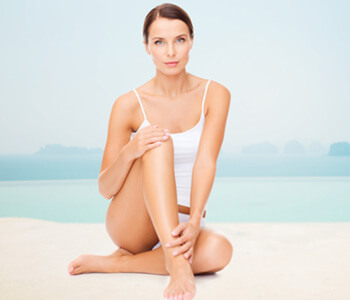 From the initial research that led to CoolSculpting technology, we now have a large body of research that supports what an attractive option this noninvasive procedure can be for many types of individuals. CoolSculpting, by the numbers:

Call to schedule a consultation at our Washington D.C. office where our Coolsculpting Specialists will determine if you are an appropriate candidate for CoolSculpting. Generally, ideal patients for CoolSculpting are within 30 pounds of their ideal weight but have areas of excess fat that they’d like to trim.

END_OF_DOCUMENT_TOKEN_TO_BE_REPLACED

The number of treatment sessions required for you is individualized and unique to your needs, goals, and situation. Call 202-816-7557 to schedule a consultation.

She is skilled in Mohs Surgery and skin procedures such as excisions, mole and cyst removals as well as cosmetic procedures that include neuromodulators, fillers, and laser procedures.

What Our Patients
Have To Say